As we began discussing the possibility of our engagement, we were clear that we wanted to be intentional about our choices. We started from a place of some indifference about engagement rings. Did we want to buy an engagement ring at all? What does an engagement ring symbolize, and why is it the right symbol? Why should only the woman wear one?

After some thought, we liked the idea of a physical symbol of the commitment we were making to each other. However, we did want to each have something to show this commitment.

We read up on a lot of the standard engagement ring information: the four C's, ring styles, percentage of salary, etc. We also learned more about the justice issues surrounding diamonds. Amnesty International has had some recent success in its fight against the way diamond industry has been linked to human rights abuses in Africa.

For us, we also had a lot of concerns about the possibility of spending a large amount of money on jewelry, and felt that was not in line with our values. We were offended by some salespeople who seemed most interested in selling us up to the largest diamond possible, as well as the way the industry tries to connect the cost of the ring to the extent of our love for each other. 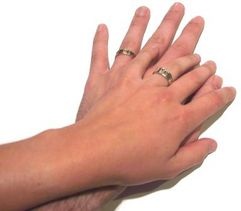 We learned of the tradition of posey rings, simple bands inscribed with meaningful sayings. Many Jewish couples have rings inscribed with verses from the Hebrew scriptures in the original language.

Since Ann was just finishing up her degree in biblical languages and can read ancient Hebrew, this seemed like the perfect option for us. The rings often use verses from the Song of Songs, which already had special significance to us.

The most common engraved verse is Song of Songs 6:3 ("I am my beloved's, and my beloved is mine"), but we felt that it had too much of a focus on possessing one another, rather than belonging to God. We decided to use verse 5:16, "This is my beloved and this is my friend."

We had matching engagement rings made with this phrase by Yehezkiel Porat, a Jewish craftsman in Jerusalem. At our engagement, we proposed to one another and exchanged the rings. The next day, Ann sat Paul down and taught him how to read the Hebrew, which is read from right to left and does not contain any vowels:

We will use these as our wedding rings as well.