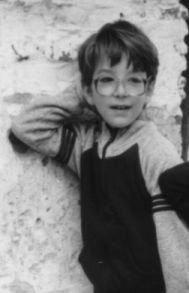 I grew up in San Jose, California, with my younger siblings Peter, David, and Julia. At Bellarmine College Prep, I divided my time between academics, speech and debate, chess, publishing a science fiction newsletter, and other wacky activities.

I then attended U.C. Berkeley, graduating with a computer science degree.  I lived at a housing cooperative named Cloyne Court with 150 other Cal students, where I had the job of coordinating the five hour per week "workshifts" to get meals cooked, keep the place clean, and maintain some semblance of order.

I was a computer geek very early on, and my parents had the foresight to purchase for me a Timex Sinclair 1000 and eventually a Commodore 64, on which I taught myself how to program.

After graduating from Cal, I landed my "dream job" at the now defunct Geoworks, where I initially worked on an operating system that was competing with Windows and later on mobile phone technology.  After over seven years (and an awful lot of failed business plans), Geoworks laid me off.

I was fortunate enough to almost immediately find a job with a bunch of Geoworks alums at Access, also working on server side software for mobile phones. I moved on to work at Digital Chocolate, developing social games for mobile phones and the web. I became an independent software consultant in 2008, which has been interesting work and has meant many less miles logged in a car.  I am now also running my own business, an Alameda community website.  You can learn more about my professional software work here.

At Cal, I was active in Catholic campus ministry at Newman Hall and grew in my interest for liturgical music and pastoral ministry.

Within a year of starting to work at Geoworks, I noticed that Jesse Manibusan was leading music nearby at St. Barnabas parish and decided to make it my new faith community, where I helped with music and a variety of other ministries.  This got me to move to Alameda, a city with unique charm and a lot of Victorian houses.

I began taking some summer courses at the Graduate Theological Union in Berkeley in 1997, before enrolling at the Franciscan School of Theology member school in 1999. Eight years later, I received my Master of Theological Studies degree.

I have been involved in pastoral ministry at a number of parishes, including St. Joseph Basilica in Alameda and St. Columba in Oakland.  My ministry experience has included young adult ministry, music, liturgical ministries, stewardship, St. Vincent de Paul, social justice, pastoral council, and more.

I went on to create Gospel Living Ministries to help Catholic parishes promote intentional discipleship and more effectively connect faith and daily life.  I am currently a parishioner at St. Augustine in Oakland.

Paul married Ann Naffziger in 2004, and has two daughters, Madeleine and Rachel.  They all live in Alameda, where they raise chickens, bees, and a garden and have a lot of fun together.  But those are the kind of things you can learn more about by reading through this website.